On Friday Nellie & I took a day of work went along to the Cycle Show at the National Exhibition Centre in Birmingham. In previous years the show has been held at Earls Court London so it was nice to see it move to a more centralized venue that’s more convenient for those of us who live north of Watford (I was still horrified at having to pay £17.40 for two return tickets from Shifnal to Birmingham International). The NEC is a better venue offering space for a more relaxed layout of exhibitor’s stalls.
One reason for going to the show was to have a play with the Garmin 800 bike computer and ask some questions of the experts on the stand. I’ve had an Edge 200 for as long as I can remember and felt that an upgrade was long overdue. I wanted something with on board maps and navigation facilities.
The people on the Garmin stand were very helpful and answered all of my questions.  Then, an awfully nice man from JD Cycles (retailer for Garmin) made me an offer I couldn’t resist (10% discount on the RRP and a bit more that is a secret) so the deal was done. I am now the official owner of a shiny new Garmin 800.  Oh, and I should mention that I also received a splendid Garmin goodie bag including DVD, Cycling Plus magazine, official Garmin cycle top, Park Tool and lots of other stuff.
Back to the show. I took quite a few pictures of some of the bikes and technology on show and you can see them all on my Flickr pages (see also Brownhills Bobs blog & photos too).
Some of my highlights
Foffa Custom Bikes - London based cycle shop specialising in steel frame custom builds at a very affordable price. Great web site for building your new bike. We spoke with Dani Foffa the MD and an all round nice bloke (I think Nellie fancied him).
Always fancied doing a bit of long distance touring so am always interested in the gear for the job. Here we have a Surly Long Haul Trucker loaded up with Ortlieb panniers and the obligatory Brooks saddle. Nice!


Another great touring machine by Condor, and in my favorite colour with Brooks Saddle and Carradice saddle bag.

Rather than camping or paying for expensive hotels then why not pull your very own caravan. Ok if you're Nellie size :-)

Having spent all of last years pocket on my Exposure Toro front light, I felt obliged to visit the stand and have a look at the range. Their sales guy was a 24 hour event mountain biker who used the largest Six Pack (far left of the picture) which is about the same size as a pint glass and costs about £500!

And finally, my highlight bike of the day, an old Colnago steel framed racer. A thing of beauty and in my favorite colour too.

Posted by Anonymous at 23:00 No comments:

It seems only right to spend a some time paying homage to the bikes that make all that we do in the society possible.

But, where to start? For me it's often the most unlikely bikes that give the most pleasure. So, let me introduce you to without a doubt the most verstile bike I own. My trusty commuter hack come Paris Roubaix weapon, and a bike that takes just about whatever you throw at it.

It's a bike that's evolved in the time that i've owned it. Originally put together using any old bits that I had spare, i've gradually honed it into just about the perfect commuter hack. I'm normally very firmly in the no mudguards camp, but as a year round commuter 'The Pomp' just about gets away with it.

It built to take abuse, so Open pro rims laced to bombproof Hope hubs cover off the wheels, whilst a mixture of On One and FSA kit complete the rest of the build. An XT chainset c.2000 and a Goldtec chainring finish things off nicely.

Earlier in the year the society paid a trip to the Hell of the North, and 'The Pomp's' services were called upon. Again it proved the perfect bike, and soaked up all that the cobbles could throw at it, including the legendary Arenberg Forest.

A fantastic bike, i'd recommend them to anyone who's after a no nonsense bike for all seasons.
Posted by 936ADL at 18:58 No comments:

I was unable to join the Saturday morning branch of the SCS today due to a family commitment. My wife, Nellie, was competing (that’s running) in the Midland road relays at Sutton Park Birmingham so I went along to support her.
However, this doesn’t mean that I shied away from the Saturday morning ride. Rather than drive to Sutton Park I loaded up the panniers on my trusty Genesis Croix De Fer with bananas and Jelly Babies and decided to bike there.
The weight of bananas and the steel frame Genesis made the going slower than normal but what the hell – it wasn’t a race.  It felt like I was working against a head wind all the way there too (or am I just unfit?).
I took the opportunity to pass through some of my old stomping grounds Bloxwich, Rushall, Coalpool and Aldridge (Walsall). Cyclists should proceed with caution through these communities, as the local motorists are not familiar with pedal powered modes of transport. Boy racers in supped up hot hatches along with rag‘n bone men in flatbed trucks show no respect when passing at speed with only a couple of inches between them and you. Their journey is obviously far more important!
Managed to survive the urban jungles and get to Sutton Park in a little less than two hours. Had a banana, watched Nellie run and had a tootle around the park on the traffic free tarmac paths (ideal for family cycling).
Came home via a slightly different route skirting closer to the northern outskirts of Wolverhampton passing through Bushbury, Albrighton and Cosford on the Sustrans cycle route 81.
58 miles in just over 4 hours. Not bad considering I kept stopping to take photos and update my location on Foursqaure (sad eh?).


Just spotted that I burned off over 3,000 calories. I'll be putting a few of them back later in The Anvil.
Posted by Anonymous at 16:40 1 comment:

Another week has passed and the society collective have been clocking up the miles nicely.

Today I hooked up with our resident webmaster for a sneaky loop on the way home from our daily distractions some call a 'career'. As you expect when Johnny is involved a fast pace was the order of the day as we made our way back to Shifnal via the town park, Tweedale, Kemberton, and Grindle.

My heart sank as we passed a farmer creating millions of puncture opportunities as we got to Grindle, and you guessed it, Psssssssssssssssssst. I managed to get home after a couple of re-inflations with about 5 mins to spare.

So what's the 2012 bit about? Well with the dates of the spring classics pretty much set, and rumours of the 2012 Tour route rife it seems only right to start thinking about next year's continental trips. Easter in Belgium followed by the Alps for the Tour seems about right.

Anyhow, the puncture's fixed and tomorrow sees another commute with Mrs L. Should be good!
Posted by 936ADL at 21:23 No comments:

All Round The Wrekin

Owing to a whole host of reasons only Mart and I made it out for this morning's ride. I managed to put my shorts on the right way round this week which was a good start.

Into the gorge, and through Buildwas we ended up going past Wroxeter, and then headed north past Haughmond Hill. We then turned right and headed back through High Ercall, Crudginton and Edgmond. A tail wind certainly helped us keep the pace up.

We only had to do a minor de-tour to crack the 80km mark, not too shabby at all. Another good ride. Anna and Julie held up the ladies section end this thursday with a sneaky 35km ride to keep things ticking over. They even seem to be chasing the average speed stat as well. 21.1km/h tonight i'm told.

As you can see, it was obviously a thirst inducing ride, but a glass(or two) of Sauvignon Blanc seems to have saved the day.

Tour of Britain 2011, a photo by AlanTheFish on Flickr.
Nellie & Johnny drag themselves from the beaches of South Wales to spend a day in Brecon to catch a glimpse of the cyclists in The Tour of Britain as they fly by on the way from Welshpool to Caerphilly.
Posted by Anonymous at 14:13 No comments: 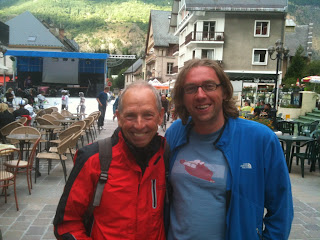 Amazingly we ran into Brian on this year's trip to the Tour. This is in Bourg D'Oisans.
Posted by 936ADL at 10:04 No comments:

A last minute withdrawal meant that only 4 of us made it out on Saturday's regular ride.

Si led the way and we headed out in the general direction of Worfield. All seemed fine as we headed up the Col de la Park Lane, but when i looked down i realised that i'd managed to put my shorts on inside out! Oh dear.

There was only one thing for it, so after finding a suitably sheltered spot, i corrected the problem as quickly as i could. I can only apologise if anyone caught sight of the whole escapade. I can't imagine it was a pretty sight. One thing's for sure, putting bib shorts on is much easier without shoes on!

After catching up with the rest of the group and coming clean about what i'd been doing, things got back to normal.

A killer headwind on the outbound leg made it tough going, but the pay back was an extremely quick return.

The society headed out to the beautiful village of Worfield, skirting around Bridgenorth. Strong headwinds and some sneaky little climbs made for an interesting outing.
35 miles covered in a little over two hours. We did have to wait whilst The Loveland stopped in a field to put his bib & shorts on the right way round. He'd dressed himself this morning :-)

Another early morning owing to a youngest daughter who seems unable to sleep beyond 630, so i thought i'd make my first contibution to our new Shifnal Cycling Society blog.

It's taken a while to get the SCS off the ground but i think it's fair to say that its well and truly up and running(or should that be cycling).

We've picked up quite a few riders over the last few months, and hopefully it will go from strength to strength.

I'm still finalising the route for our first Tour de Shropshire that we've got planned for October, and there's always next year's continental trips to be planning, as well as the spring Epic.

Anyway that's it for now, i'm off to drink coffee and get a route together for this morning's ride.

Posted by Anonymous at 23:17 No comments: